COULOMB EXCITATION AT THE WARSAW CYCLOTRON

The Warsaw Coulex Group was gathered in the early nineties around Tomek Czosnyka, who was its leader until his death in 2006. Under his supervision three PhD and two MSc theses were completed, all applying the Coulomb excitation method to nuclear structure studies.

Coulomb excitation (Coulex) is a powerful method to study nuclear structure. Proper selection of the beam energy assures that the interaction between the colliding beam and target particles is purely electromagnetic, thus allowing for the model-independent description in terms of classical electrodynamics, free from assumptions concerning the nuclear forces. The use of various beams and covering broad ranges of scattering angles makes it possible to measure full sets of the parameters of the electromagnetic structure up to high-spin levels – transitional matrix elements and static moments, which are related to spectroscopic observables such as lifetimes, gamma-ray intensities, branching and mixing ratios. Finally, the knowledge of a full set of matrix elements can be used to determine the shape of the nucleus for each excited level independently, thus serving as “nuclear microscope”. Heavy ion Coulex provides a stringent test of existing models in a purely experimental way.

Recently new interest in Coulex has been drawn by commissioning of the radioactive beam facilities that open perspectives to study the structure of unstable nuclei.

An excellent summary of the Coulomb Excitation method its’ broad applications and  achievements was presented by prof. Douglas Cline in his acceptance speech at the Smoluchowski Medal award ceremony in Poznań, 2013.

Heavy Ion Laboratory is capable of performing full-scale Coulex projects. The U-200P cyclotron offers a wide range of heavy ion beams and the flexibility of adjusting the beam energy according to the requirements.

In the Coulomb excitation experiments, coincident detection of gamma radiation and scattered particles makes possible to uniquely and precisely ascribe the observed gamma rays to the kinematics of collision. This in turn enhances the efficiency of experiments – one physical run can be off-line divided into several data sets differing by the impact parameter defined by the particle scattering angle. Such an operation is equivalent to performing several experiments at the same real time.

Coulomb excitation has been one of the leading experimental techniques since its establishment at HIL in the early nineties. The first successful experimental campaigns were performed using the CUDAC (Coulomb Universal Detector Array Chamber) setup, which was constructed in the Laboratory and installed as one of the permanent experimental stations. This historical array was coupled to the set of small-size gamma detectors, and has been later replaced with a compact scattering chamber dedicated to work with the HPGe gamma detector spectrometer, EAGLE. Currently a new particle array – SilCA (Silicon Coulex Array) based on a double-sided silicon strip (DSSSD) detector is currently being under development at HIL Warsaw. For the implementation of it, a 20 cm of diameter vacuum-tight spherical chamber has been designed and built. 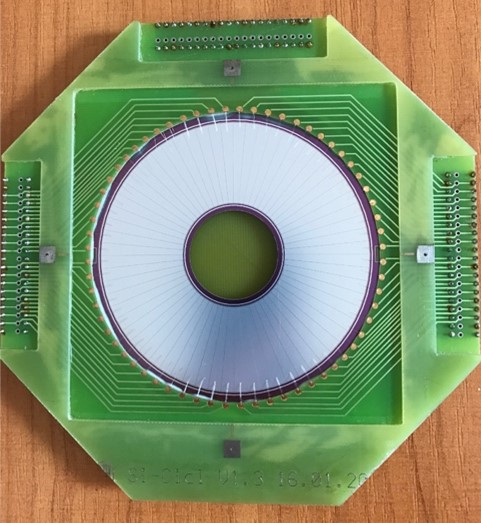 Technical specification of the array: 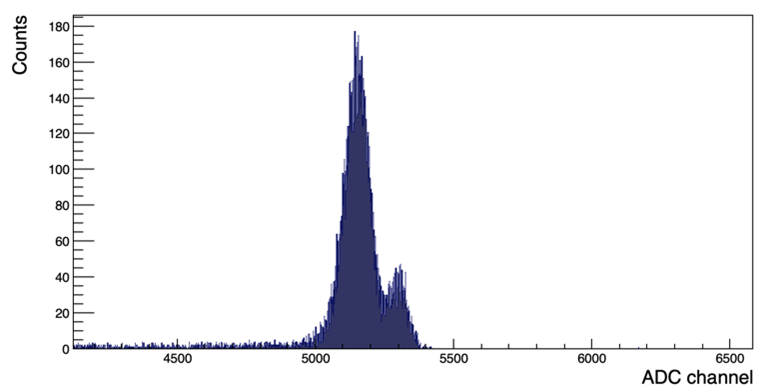 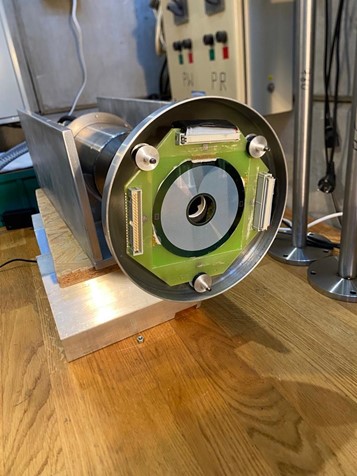 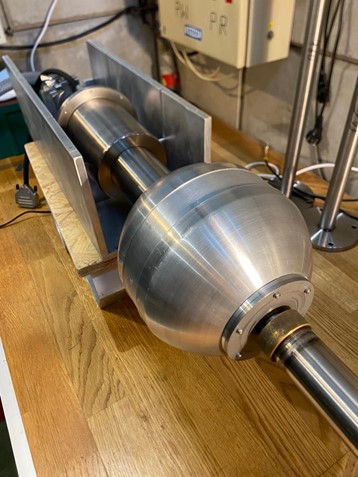 In December 2022 our new setup was commissioned at IJC Lab (Orsay, France). A new Coulex chamber withe the DSSD detector was placed in the centre of the setup, surrounded by the 𝞶-ball2 HPGe clover array and PARIS LaBr3 (CeBr) + NaI scintillator calorimeter.

We performed a test of the Coulomb excitation reaction with the 16O beam (66 MeV) scattered on a 197Au target. 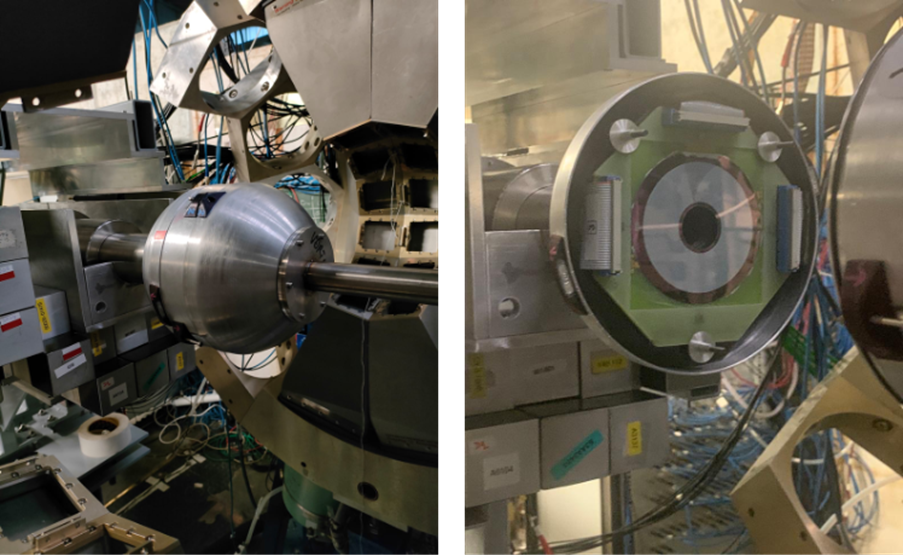 The compact scattering chamber of 10 cm in diameter, which was successfully integrated with the EAGLE spectrometer at HIL and commissioned in 2006, was designed and developed at LMU Munich as a setup dedicated for use with the NORDBALL HPGe array for the Coulomb excitation experiments. Its small size allows placing EAGLE HPGe detectors at close distance from the target, thus increasing gamma detection efficiency. The concept of this scattering chamber is based on the PIN-diode technology. The relatively small active area of a single detector (0.5 x 0.5cm) provides good information on the scattering angle. Hence, the precise information on the reaction kinematics is obtained using many such detectors in one setup.

The chamber can accommodate up to 110 PIN-diodes, covering the backward angles from 110 to 170 degrees with respect to the beam direction. At present, 48 PIN-diodes are used. The inner view on the setup is presented in Fig. 4. 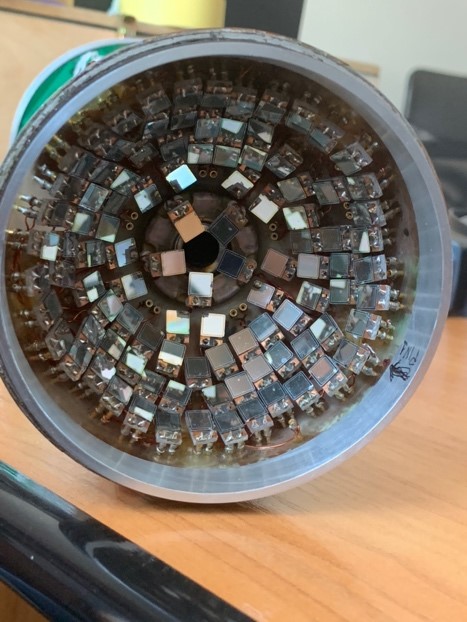 Fig. 4 The backward hemisphere of the Coulex scattering chamber.

Schematic drawing of the scattering chamber. Individual socket in which the PIN-diodes can be placed are numbered from 1 to 110.

Angular distribution of PIN-diode detectors placed at the backward hemisphere of the Coulex chamber.

Last but not least, HIL Coulex team is in command of the sophisticated software necessary to analyze the wealth of data from the experiments. This includes both processing of “raw” data and further extraction of electromagnetic matrix elements from measured gamma-ray intensities. The analysis computer codes, GOSIA and SIGMA, developed, maintained and updated by Warsaw Coulex group members, are now used by numerous world laboratories dealing with Coulomb excitation. A list of collaborating centers include Rochester and Argonne (USA), Saclay and Orsay (France), Leuven (Belgium), Liverpool (UK), Jyvaskyla (Finland), Muenchen (Germany), Chandigarh (India), Tokai, Chiba, Osaka and Kyushu (Japan).

It should be stressed that available data from heavy ion Coulex are still scarce, so our Coulex project has obviously wide perspectives for the future. It already is and should remain for the years to come one of the home specialties of the nuclear physics in Warsaw.